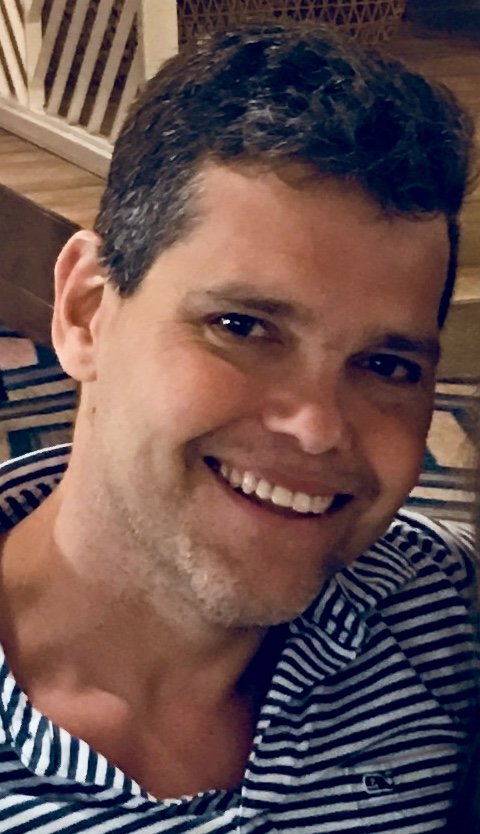 Please share a memory of Rupert to include in a keepsake book for family and friends.
View Tribute Book

Rupert FitzAllan Chisholm III, extraordinary husband and father, passed away on January 5th after an almost 8 year valiant and continuous fight against cancer.

Rupert was born on March 13, 1969 in Brussels, Belgium to Rupert F. and Kathleen Slagel Chisholm.  Rupert spent most of his childhood in central Pennsylvania.  He graduated from Washington and Lee University in 1991 where he played football and went on to get a Master’s degree at the University of Rochester.

Rupert made his way to New York City and started his career as a journalist including time as a writer for the Wall Street Journal.  While in New York he met and married his wife, Kiki.  He went on to a career in finance working for Moody’s Investors Service and Lehman Brothers for many years which brought his family to London for a time.

He settled back in New Canaan where he has lived since 2009 while continuing to work in finance at One William Street Capital in New York City.  While Rupe loved his work, nothing took priority over his family. His love for his boys Charlie and Miles and for his wife Kiki was boundless. His perseverance, strength and sheer grit in the face of an incurable cancer diagnosis was both humbling and astounding to witness.  He refused to miss a moment in the lives of his boys, volunteering for their youth football teams, pushing through pain and fatigue to support the most important people in his life.

Rupe completed the Marine Corps marathon prior to his diagnosis, and the NYC Marathon in the middle of radiation treatment.   Rupe’s innate desire to further challenge himself included the participation in two 200-mile PanMass Cycling Challenges to raise money for cancer research.  In addition, he completed two Cape Cod Ragnar Relays in support of autism research.

Through nearly 8 years of cancer treatment Rupe took care of his wife and boys, always.  His love of life, sheer goodness to those around him and overall exceptionalism in all aspects of his life has been an inspiration to his family and friends.  He was a marvel.

Rupe loved fishing with his son Miles and throwing the football with his son Charlie, and simply spending time and sharing conversations with them. The love he shared with his wife is the stuff of dreams. Rupe loved his summer weeks spent on Cape Cod, building epic sand castles, biking, fishing and boogie boarding with his boys.  He loved to play his guitar, was incredibly well read, loved music and watching Giants games with his boys.

A public walk through visitation will be held on January 12, 2021 from 4pm-6pm at Hoyt Funeral Home, 199 Main Street, New Canaan.   Visitors are asked to wear masks as they walk through, observe social distancing and pay their respects and exit without lingering to ensure all guests can come through the building.  A celebration of life is planned for late Spring.

Share Your Memory of
Rupert
Upload Your Memory View All Memories
Be the first to upload a memory!
Share A Memory