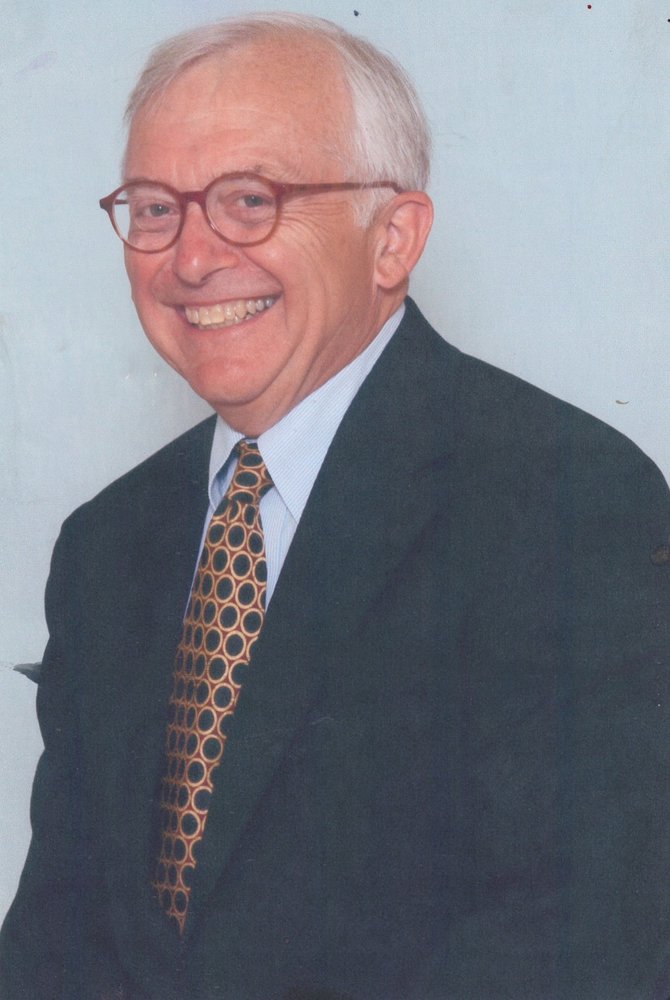 David Swem Branch of New Canaan, CT and Peconic, NY, passed away on December 21, 2020 after a long battle with Lewy-Body Dementia. He is remembered for his intelligence, warmth, charisma, kindness, sense of humor, and readiness for adventure.

David was married for 50+ years to Elizabeth “Betty” Branch. He was a loving and proud father of his son Richard Frederick and daughter-in-law Katherine of Wilton, CT, and adoring “PopPop” of Abigail and Evan. He is missed by his lap cat Delilah, the latest in a long line of beloved animals that began with his childhood dog Specky. He was predeceased by his parents Frederick VanCleft Branch and Margery Swem Branch, and his brother Kenneth V. Branch of Merritt Island, Florida.

Born April 25, 1936, in Binghamton, NY, he graduated Binghamton Central High in 1954 as “the boy most likely to succeed.” He was awarded a four-year scholarship and attended Lafayette College in Easton, PA where he was President of Phi Delta Theta, the Inter-Fraternity Council, and the recipient of the George Wharton Pepper Prize, awarded by vote of the faculty and students to the senior “who most nearly represents the Lafayette Ideal.” Graduating in 1958 with a BS in Business Administration, he followed with an MBA in Finance and Accounting at the University of Pennsylvania’s Wharton School.

David began his career as an accountant at Eastman Kodak in Rochester, NY and later transferred to Eastman Chemical Products in Kingsport, TN and New York City, in sales and marketing. In 1966 he joined Fairchild Publications in New York City, where he rose to Senior Vice President and Publisher of numerous trade and professional publications. He remained at Fairchild through its incorporation into a division of CapCities/ABC, retiring in 1990. In 1992 David was recruited by Thomson Financial Services of Toronto to lead its Financial Information Group, which included American Banker and The Bond Buyer newspapers, as well as the group’s other banking and financial-related media. He retired from Thomson in 1996.

While successful in business, friendships were more important to David. His classmates at Lafayette, his colleagues from Eastman, Fairchild and CapCities and Thomson became his friends over his lifetime. In his retirement, Friday meetings at the New Canaan Senior Mens Club became a ritual for him. He enjoyed the camaraderie of its members and found new friends through the group’s varied activities.

Following the stock and bond markets was a life-long avocation. He scoured annual reports, financial newspapers and magazines, and afternoons found his TV tuned to Bloomberg and CNBC. He pursued his love of history, participating in classes at Norwalk Community College and traveling the country visiting Civil War battlefields.

Boyhood summers spent in the Adirondacks fostered his love of the outdoors. His first date with his future wife was an invitation for a descent from the top of the New Jersey Palisades to the Hudson River. That, and a 1965 baby blue Buick Skylark convertible, sealed the deal for Betty. David was a hiker, skier, swimmer, tennis and paddle player who traveled the world to enjoy these pursuits. Never alone, he always had friends and family along to enjoy the adventures with him. Skiing out West with his son or the “New Canaan Ski Club” was always a treat for him.

He liked nothing better in Peconic than sharing his love of boating, kayaking, and tennis with his family, neighbors, and friends. A perfect day for David began with a walk on the beach, a game of doubles with neighbors and friends, and a boat ride around Peconic Bay. In later years he relished collecting seashells, rocks and tidal pool treasures with Abby and Evan. Evenings began on the porch with family, friends, peanuts, pigs in a blanket, and ice cold beer. A medium rare hamburger with mayo on the side would undoubtedly follow.

No dinner was complete without David leading a rendition of the “Binghamton town song” (which no one from Binghamton has never heard) and a round of his father’s card game Boo-Boo. His colorful scorekeeping, complete with declarations of who was the "Big Be-head and the Big Behind,” brought raucous laughter from friends and children alike, only making David’s signature smile grow wider.

The family will be forever grateful and never forget the love, thoughtfulness, and care of Elaine Spence and Maureen Dixon who were David’s companions and caretakers. His smile when he was with them said it all; he loved them and was nurtured by them. The family thanks the staff at Bridges of Norwalk for their care of David while he was a resident. They kept his spirit alive and we are grateful.

A celebration of David’s life will be held in New Canaan when it is safe to gather again.

Share Your Memory of
David
Upload Your Memory View All Memories
Be the first to upload a memory!
Share A Memory