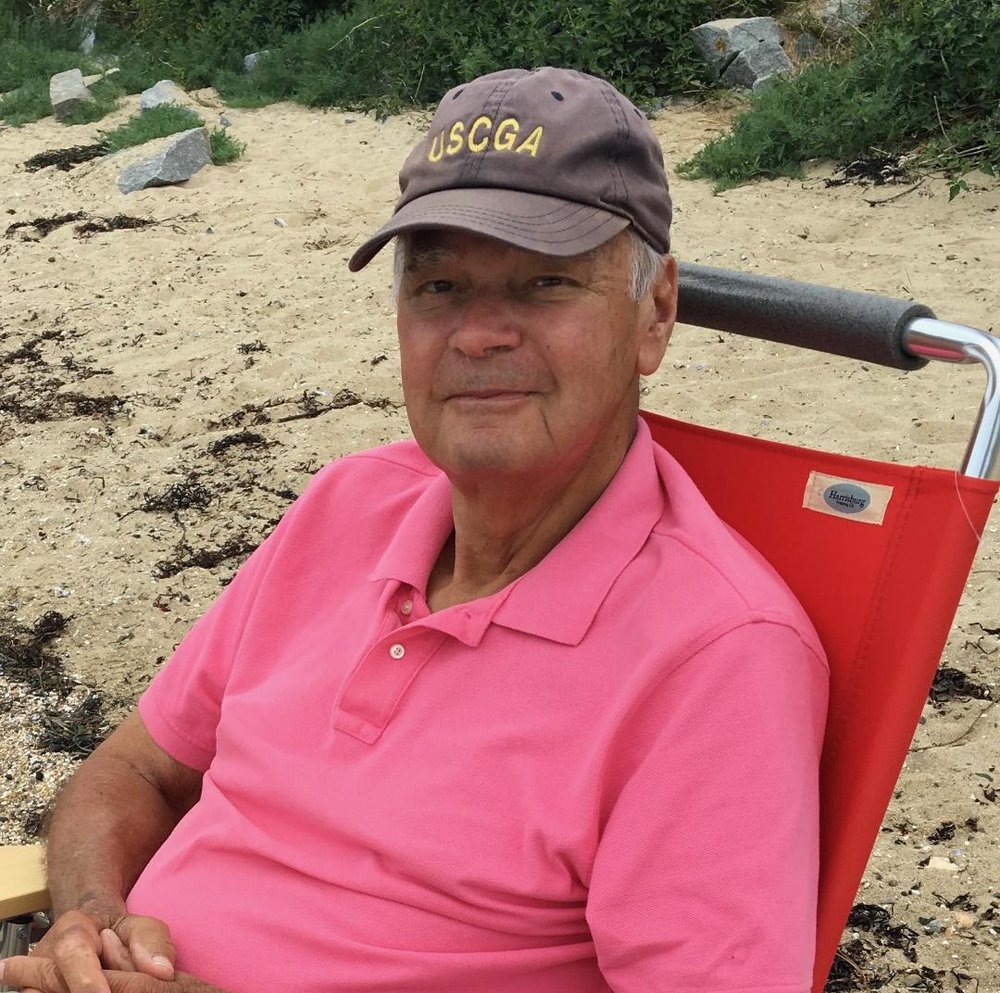 Ernest “Ernie” John Mayer, Jr., of New Canaan, CT and formerly Walpole, ME, died peacefully at Stamford Hospital on June 20, 2019, at age 88 after a brief illness with his loving family by his side, shortly after celebrating his 65th wedding anniversary to his beloved wife Lillian.

He was born in New York City on December 13, 1930, to Theresa (Mazura) Mayer and Ernest John Mayer, Sr. He lived in the South Bronx, NY, until his family moved to Hawthorne, NJ when he was in the second grade. He graduated from Hawthorne High School in 1948. He then worked in Manhattan for two years at AT&T and New York Telephone Company until winning a competitive appointment to the United States Coast Guard Academy in New London, CT. He sailed on four cadet training cruises aboard the square-rigged training ship USCG EAGLE, visiting Europe twice, as well as the Canary Islands, Bermuda, and Nova Scotia. He graduated from the Academy in 1954 with a B.S. in Engineering, served as president of his class and battalion executive officer (the second-highest cadet position), and won the Superintendent’s Price for “outstanding character in the opinion of his classmates.”

Two days after graduation, Ernie married his hometown sweetheart and fiancee of two years, Lillian Dykes. They moved to Virginia Beach, VA, where they began married life, and he started his career as a Deck Watch Officer, then served as Assistant Engineering Officer, on the 311-foot cutter, USCG ABSECON, which performed weather patrol duty in the North Atlantic for the safety of overseas commercial aircraft. Later he served as Commanding Officer of the USCG Loran navigation station in Aguadilla, Puerto Rico; Training Officer at the USCG Training Center in Cape May, NJ; and Student Officer at the U.S. Navy Post-graduate School in Monterey, CA, where he earned an M.S. in Management and wrote a thesis on the possibilities for the use of computers in U.S. Coast Guard activities that was forwarded to Coast Guard Headquarters in Washington, DC, by the Management School. He then served as the Executive Officer on the USCG COWSLIP, a 180-foot buoy tender based in South Portland, ME, which serviced the lighthouses and navigational aids along the Maine coast, from Kittery to Rockland. His role as the primary ship handler fostered his deep love for the rugged coast of Maine. His next assignment brought him to the Chief of Staff’s Office at U.S. Coast Guard headquarters in Washington, D.C. In 1964, he resigned his commission as Lieutenant Commander to pursue his interest in computers and joined the IBM Corporation, Data Processing Division. He spent 25 years with IBM in a variety of sales and marketing positions in Washington and, later, White Plains, NY, before retiring from the company in 1989. After a two-year period as Hospitality Industry Marketing Manager at the Norwalk, CT, headquarters of ROLM Corporation, he and Lillian moved to the Walpole area of South Bristol Maine, where they lived happily for 26 years before moving to New Canaan to be near their sons and extended family. Ernie’s life-long loves were his wonderful family, photography, Scottish Terriers, and Volkswagens.

In addition to his wife Lillian, Ernie is survived by his two sons: Drew Mayer (Maureen) of New Canaan, CT, and Brad Mayer (Olya) of Ridgefield, CT and four grandchildren, Charlotte, Bradley, Maxim and Brett.  He was predeceased by a brother, Robert.

Share Your Memory of
Ernest
Upload Your Memory View All Memories
Be the first to upload a memory!