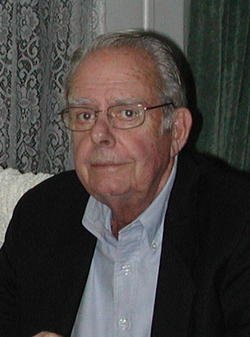 Robert Yff, age 77, a longtime Norwalk resident, died Sunday October 19, 2008 of injuries sustained from a fall at the summer home he built on Fire Island. Born in Venezuela of Dutch parents on January 22, 1931, he was the son of the late Johannes Yff and Sophia Magdalena Korlaar Yff. Robert was the husband of Mary Margaret "Peggy"Girard Yff. He was pre-deceased by his first wife and mother of his children, Trudy Yff. Bob spent his childhood in Montclair, New Jersey, graduated from Montclair High School in 1949 and went on to graduate from Fairleigh Dickinson University with a B.S. in Industrial Engineering. Bob was a US Air Force Veteran. He held important positions at GV Controls, RCA, Markite, and eventually went on to the Presidency at Ray Proof Corporation. In 1989 he founded Panashield, Inc., which is a world leader in design, construction and certification of test facilities for electromagnetic compatibility. Second to Bob's love of his family was his love of Fire Island, surfcasting, and boating on the Great South Bay. He shared this love and enthusiasm with countless family and friends, whose lives he touched so deeply. Bob is survived by his wife Peggy, daughter Pamela Jayakar and her husband Harshad of Shelton, CT, daughter Linda Atwood and her husband Tom of Brookfield, CT, a brother, Joost Yff of Riva, MD, and five grandchildren, Nicole, Jessica, Neil, Derek and Ashley. The family will receive friends at the Hoyt Funeral Home, 199 Main Street, New Canaan on Thursday evening from 4 to 8 pm. A memorial Service will be held at a later date on Fire Island. In lieu of flowers, contributions may be made to one or both of the following organizations in recognition of the assistance given by the EMTs: Ocean Bay Park Fire Department Care Of Bodkin 26 Broadway, Suite 752 New York, NY 10004 Ocean Beach Fire Department PO Box 386 Ocean Beach, NY 11770