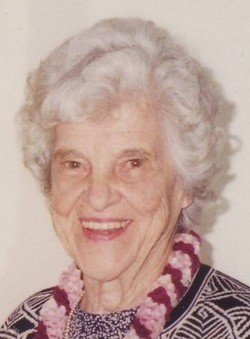 Lillian B. Janis, age 97, a New Canaan resident for 70 years, died peacefully at home on Saturday morning, September 13th. Born in Stamford in December, 1910, she was the daughter of the late Emilia Kowalski Poltrack and Anthony Poltrack. She was one of eight children. She was pre-deceased by Adeline O. Poltrack, Helene Poltrack Romako, Mary Poltrack, Henry Poltrack, Anthony Poltrack and Francis Poltrack . She is survived by her youngest brother, Edward Poltrack of Stamford. Adeline, Anthony, Edward and Francis (who lost his life in battle) served in the WAVES, Army, Air Force and Marines during WWII. Lillian grew up in the Polish community of the South End of Stamford, where her parents helped physically build the Holy Name of Jesus Polish Catholic Church. She sang on the choir for several years. She attended the Holy Name of Jesus Elementary School, Rice School and graduated from Stamford High School in 1929. She then attended the Stamford Hospital School of Nursing, of which she was most proud, where she earned the title of Registered Nurse. Her first employment was with the Health Department of Stamford. Because of the depression, she moved into private duty nursing for a number of years. Around this time, she met and married Edward M. Janis, her sweetheart for 63 years until his death in 1999. She and Ed moved to New Canaan and raised their family of four. Marcia Janis Spiegelberg, deceased, (Mrs. Harrison), of Honolulu, Hawaii; Cynthia Janis Northgraves (Mrs. William) of Holliston, MA; Edward Michael Janis of Dover, NH and Robert F. Janis of St. Helena, CA. Lillian returned to nursing in 1958 and worked at Norwalk Hospital for eight years. She then left to be among the original nursing staff at the new Waveny Care Center in New Canaan. As a result of her love of nursing, she volunteered at the New Canaan Visiting Nurse Thrift Shop in New Canaan for over 30 years. Lillian was active in the St. Aloysius Catholic Daughters association for many, many years and was well known for her handiwork and particularly, her beautiful pot holders and aprons. Her hands were always busy braiding rugs, knitting, crocheting, sewing or doing needlepoint. If she wasn’t doing one of her crafts, she was in the garden as the seasons allowed or working a jigsaw or crossword puzzle. She was part of the bridge players at the Lapham Senior Center for many, many years, playing her last hand and winning her bid in mid-August. She had some Master’s Points in this card game and loved the challenge. She mastered the computer and enjoyed the p.c. games and reading her email. Lillian is survived by 8 grandchildren, William Northgraves, of Natick, MA; Deborah Northgraves Mahoney of E. Greenwich, RI; Peter Northgraves of Atlanta, GA; Susan Spiegelberg of St. Paul, MN; Amy Janis Sanchez of Sacramento, CA; Jeffrey Janis of Seattle, WA; Edward M. Janis of Rochester, NH and Katie Janis Carpenter of Dover, NH. She is also survived by11 great-grandchildren; Andrew, Sean, Jack and Molly Mahoney; Grace and Abigail Northgraves; Peyton and Eisabella Janis, Ty and Reese Carpenter and Izara Lillian Sanchez - all of whom she was able to spend time with and enjoy. A Mass of Christian burial will be held on Friday, September 19, 2008 at 10:00 a.m. in St. Aloysius Church, Cherry Street, New Canaan. Interment in Lakeview Cemetery. Friends may call at the Hoyt Funeral Home, 199 Main Street, New Canaan on Thursday from 4:00 – 8:00 p.m. www.Hoytfuneralhome.com. Memorial donations may be made to the New Canaan Get About; Holy Name Church of Stamford, and Mid-Fairfield Hospice.

Share Your Memory of
Lillian
Upload Your Memory View All Memories
Be the first to upload a memory!