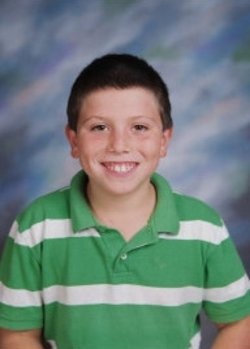 James Michael “Mikey” Czech, age 11, a resident of New Canaan, CT, passed away on September 7, 2008. Born on January 6, 1997 in Highland Park, Illinois, Mikey is the son of Stephen J. and Jennifer L. Czech of New Canaan, CT. Mikey was a student in the sixth grade at Saxe Middle School in New Canaan, CT. He was an active tennis, baseball and flag football player. He was also an honorary member of the White team for sixth grade New Canaan Football. Mikey was an exemplary friend, brother, son and grandson. Known for his luminescent smile, politeness, humor and warmth, Mikey touched the lives of thousands of well-wishers as he battled a rare form of brain cancer. In addition to his parents, Mikey is survived by; his sister, Sydney Nicole Czech, his maternal grandparents, Donald C. and Dolores (Konvalinka) Anderson of Ottawa, IL, and his paternal grandparents, James L. and Diane M. (Jawor) Czech of Lake Forest, IL. A Mass of Christian burial will be held at 10:00 am, Friday, September 12th, at St. Aloysius Church, Cherry Street , New Canaan, CT. Interment will follow at Lakeview Cemetery. The family will receive friends on Thursday, September 11th, from 2:00-8:00 p.m. at the Hoyt Funeral Home, 199 Main Street, New Canaan, CT 06840 In lieu of flowers, contributions can be made to the Mikey Czech Foundation, Inc. 400 Atlantic St., 12th floor, Stamford, CT 06901. Friday September 12, 2008 , 10:00 am at St. Aloysius Church Click for Map and Directions Friday September 12, 2008 at Lakeview Cemetery Click for Map and Directions

Share Your Memory of
Mikey
Upload Your Memory View All Memories
Be the first to upload a memory!