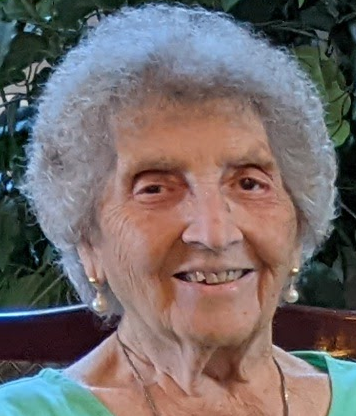 Please share a memory of Marie to include in a keepsake book for family and friends.
View Tribute Book

Marie Palma DiBarnaba, 96, lifetime resident of New Canaan, CT, passed away peacefully surrounded by her loving family on December 10, 2022. She was born in Settefrati, Italy on March 17, 1926, to the late Domenico and Antonia Malizia. Marie was the beloved wife to the late Anthony Joseph DiBarnaba Sr. of New Canaan.

Marie traveled to the United States via Ellis Island aboard the SS Conte Biancamano with her mother Antonia in 1930 to reunite with her father in New Canaan.  A graduate of New Canaan High School in 1943, she married her high school classmate Anthony DiBarnaba in 1948.  Living nearly her entire life in New Canaan, she resided on Garibaldi Lane.  Marie was a caring person who was a member of the Catholic Daughters of America.  She also worked as an aide at Silver Hill Hospital in New Canaan until she retired in 1998.  She deeply loved her children, grandchildren, great grandchildren, siblings, nieces and nephews and will be dearly missed.

She is survived by her children JoAnn Landry and her husband David of Uxbridge Massachusetts, Anthony DiBarnaba Jr and his wife Lori of Clearwater Florida, and Joseph DiBarnaba of New Canaan, sisters Fiz Tomaselli and Violet Ruscoe of New Canaan and Josephine Krone and her husband Alvin of Farmington Hills Michigan, grandchildren Brian DiBarnaba and his wife Natalie of Oak Park California, Kristin Fazio and her husband Mark of Marblehead Massachusetts, Jennifer Landry and her partner Jerry Banach of Mineola New York,  six great grandchildren Maya, Theodore, Brooke, Claire, Zachary, and Sophia as well as many nieces and nephews.

Marie was predeceased by her brother Anthony Malizia formerly of Plantsville Connecticut.

In lieu of flowers donations can be made to:

Share Your Memory of
Marie
Upload Your Memory View All Memories
Be the first to upload a memory!
Share A Memory