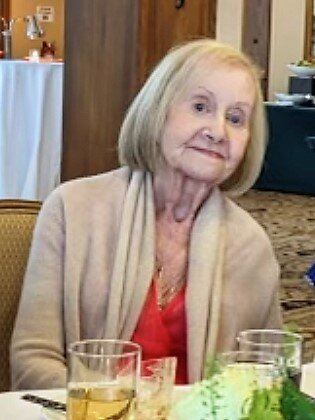 Please share a memory of Lucy to include in a keepsake book for family and friends.
View Tribute Book

Lucy Lorenzato passed away peacefully at Nathaniel Witherell in Greenwich, Connecticut on the morning of September 20, 2022.

Lucy was born and raised in New York City on May 29, 1930.  Her father, Raphael Romano owned a Butcher shop in Greenwich Village and her beloved mother, Rose was a homemaker.

In 1959, Lucy met an Italian Air Force officer,  Mario Lorenzato, while stationed at Fort Monmouth, New Jersey where she was secretary to a 4 star General.  They married on January 2, 1960 and moved to Italy. They returned to the United States for the birth of their first child, Marilena, and subsequently settled in Long Branch New Jersey where they raised their 4 children: Marilena, Gina, Gabriella and Mario Jr.

Mario Sr. and Lucy moved to Boca Raton, Florida after their children were grown. Once Lucy's beloved husband passed (in 2012), she shared her time between Boulder, Colorado and New Canaan, Connecticut with her daughters.  She was strong in her Catholic faith, loved to watch old movies, cook, and spend precious time with her family.

On June 25th of this year, with much joy and pride, Lucy attended the wedding of her first grandchild, Alexander Greig to his wife Jessica Klinger.

Lucy is survived by her 4 children, their spouses and 4 grandchildren.

In lieu of flowers, the family kindly requests donations be made to Lucy’s beloved charity, St. Jude Children’s Research Hospital in Memphis Tennessee.

Share Your Memory of
Lucy
Upload Your Memory View All Memories
Be the first to upload a memory!
Share A Memory