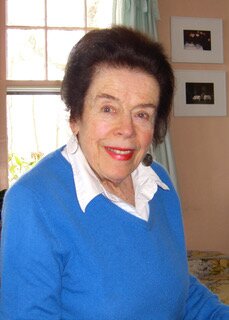 Please share a memory of Mary to include in a keepsake book for family and friends.
View Tribute Book

She graduated from Dedham High School and received an A.B. in English from Regis College. At Regis, she was the President of the German Club and was called “The Songbird of her Class.” Mary loved to sing and, after college, sang on the Ed Sullivan Radio Show and with Arthur Fiedler’s Boston Pops.

She met her beloved husband, Urban J. Monahan, through friends. Their first date was visiting churches on Holy Thursday. They were married at St Mary’s Church in Dedham and moved to Baltimore, Maryland, where Mary taught school and was an insurance agent for Liberty Mutual. Mary and Urban later returned north and lived in Larchmont, New York and Darien, where they raised their five children.

Mary’s unconditional love for her family was always her first priority. She had a magnificent smile, was quick witted and had a real sense of humor. She believed that always being positive and living for today was the remedy for everything in life. While living in Connecticut, she was a member of Wee Burn Country Club, where she played duplicate bridge, bowled and played an occasional 9-hole round.  She was also a member of the Darien Community Association and Garden Club and sang in the St. Thomas More Choir and with the Park Street Singers.

Mary was predeceased by her husband, Urban, after almost fifty years of marriage and by her brother, Tom Hannon, an oblate missionary priest in South Africa.

A celebration of Mary’s life will be held in 2022.

Share Your Memory of
Mary
Upload Your Memory View All Memories
Be the first to upload a memory!
Share A Memory