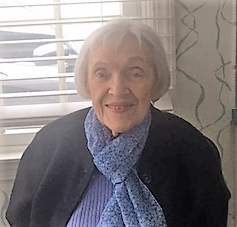 Katharine Torrence Cerow passed away on Wednesday, July 28, 2021 at her home in New Canaan, CT
Katharine Ridgely Torrence was born to Findlay and Patricia Broadstone Torrence on 3/29/29 in Xenia, Ohio.

She was educated at Xenia Central High School and Bryn Mawr College, Class of 1951. After graduation, she worked as an actress ( stage name Katchie Torrence) in NYC and Summer Stock and Off Broadway.

In 1964, she married Vincent E. Cerow, Esq. (Dartmouth Class of 1934). They moved to New Canaan in 1969 where she was very involved in the Community. She was a member of St. Mark’s Episcopal Church, Woodway Country Club and The Country Club of New Cannan.

She is survived by her sons Peter Torrence Cerow of Norwalk, CT and Robert Delany Cerow ( wife Megan) of Duxbury, MA and her granddaughters Carson Schuyler and Tally as well as her stepsons Richard Cerow (wife Liz) of Indian Harbour, FL and Stephen Cerow ( wife Trudy) of Rockville Center, NY and 7 step-grandchildren and 12 step-great grandchildren, all of whom she dearly loved. She was predeceased by her husband Vincent E. Cerow, brother, Findlay MacDowell Torrence (wife Peggy), and sister Jean Torrence Bales ( husband Jack).

Donations can be made to a charity of your choice.

Share Your Memory of
Katharine
Upload Your Memory View All Memories
Be the first to upload a memory!
Share A Memory