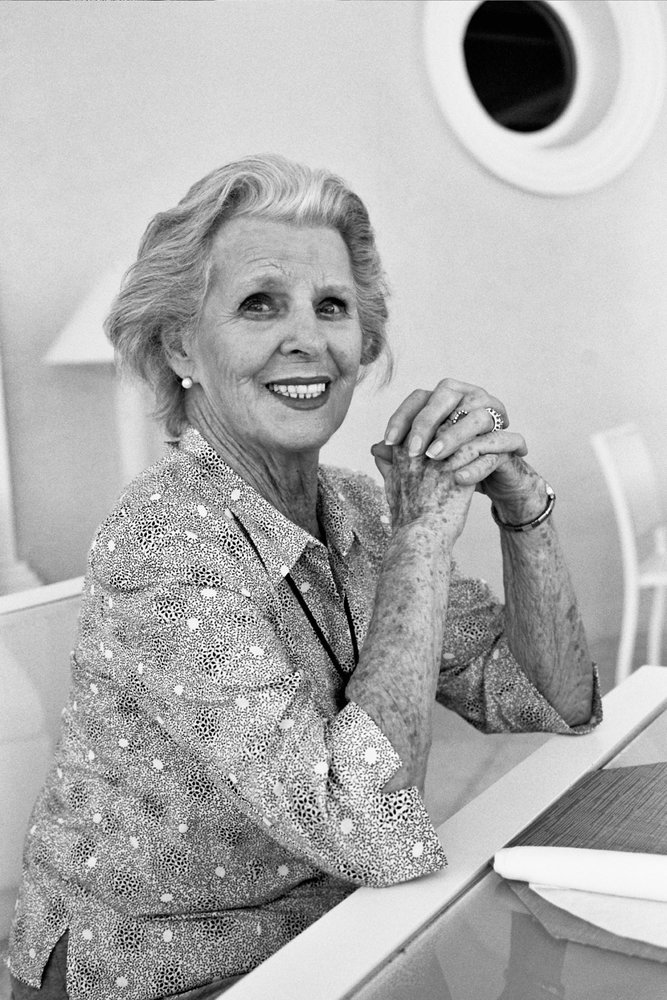 Brigitte Seitz Cromwell, 94, known affectionately as “Brig,” of Redding, CT, formerly of Norwalk and New Canaan, CT, and Naples, FL passed away on October 25, 2020 at Norwalk Hospital. Brig was born on August 16, 1923 in Bad Kreuznach, Germany to the late Georg H. and Hildegard Hübener Seitz. While the COVID-19 pandemic made it difficult to have the goodbye her family imagined, they are comforted knowing that Brig passed away peacefully and surrounded by memories of a rich and beautiful life. Brig and her beloved sisters, Jutta and Inge, were lifelong best friends. Brig was known to say, “Jutta was the smart one, Inge the beautiful one, and I was the fun one!” All who knew her would agree; while she was extraordinarily elegant, Brig was also very funny and could make anyone feel immediately comfortable and at home. Brig was always very athletic, enjoying gymnastics as a child, and playing tennis and golf well into her 80s. As a young woman, she was known to hike mountains in the Alps with her skis strapped to her back. A natural artist, Brig earned a degree in Design in Mainz, Germany, her talents being put to good use helping friends create their dream spaces. After World War II, Brig met her late husband, Walter, who, as a civil engineer with the U.S. Army Corps of Engineers, was stationed in her hometown of Bad Kreuznach to assist in rebuilding Germany. Lucky for Walter, Brig was the girl “next door”, and Brig’s mom suggested that Brig meet “the handsome boy” who had recently moved in. The couple married on December 28, 1954 at the local Lutheran church in Bad Kreuznach. Shortly after, Brig and Walter moved to the United States, settling in Norwalk, Connecticut where they had two children, Carolyn and Walter before moving to New Canaan. Together, the four loved to travel and would return to Germany every summer for a joyful annual reunion with family. Brig was a former member of the New Canaan Field Club and the Audubon Country Club of Naples, FL. Best known for her generosity and sense of humor, Brig’s magnetic energy could capture anyone’s attention and draw them in for a memorable conversation. In many ways, Brig was a miracle to have lived through World War II, famine, and profound loss, and to have still been so gentle, kind, accepting, and optimistic. Brig was known for being an enthusiastic and creative grandmother who would design fun games and projects to enjoy with her beloved grandchildren, who called her “Omi.” She loved to sing songs, often in her native tongue, and to visit the ice cream shop with her children and grandchildren. Her grandchildren are grateful to have had a grandmother who was “unlike any other,” and who never failed to show them she was proud. Brig is survived by daughter and son-in-law, Carolyn and Greg Wheeler of Norwalk, formerly of Wilton, her son, Walter B. Cromwell, Jr of Norwalk, formerly of Wilton, her four grandchildren, Erin and Jack Cromwell, Chris and Lindsay Wheeler, and her beloved dog, Schnitzel. Her husband of 58 years, Walter B. Cromwell, Sr. pre-deceased her in 2013. Brig’s family will carry on her legacy by striving to always spread the kindness and compassion Brig was so widely known for. A private graveside service to celebrate Brigitte’s life will be held at a later date. In lieu of flowers, contributions in Brigitte’s memory can be made to the Norwalk Hospital Foundation, 34 Maple St., Norwalk, CT 06856.

Share Your Memory of
Brigitte
Upload Your Memory View All Memories
Be the first to upload a memory!
Share A Memory