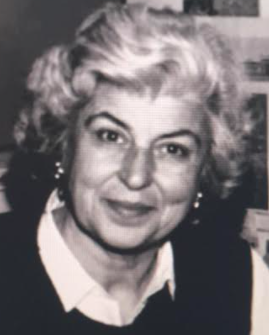 Obituary of Cleo I. Siderides, M.D.

Cleo Ioannides Siderides, M.D., loving wife, mother, and grandmother passed away peacefully at home in New Canaan on September 30, 2020 at the age of 93. Cleo was born in Athens, Greece, in 1927 to Theologos Ioannides and Elizabeth Lambridou, Greek refugees from Turkey. She and her sister, Aikaterini, who predeceased her in June, lived through the Nazi occupation of Greece during WWII. The sisters were pioneering women and did not view their gender as a hindrance. Both would go on to earn medical degrees. Cleo met Lambros E. Siderides at the University of Athens Medical School where she was one of ten women in a class of five hundred. After graduation, they emigrated to the United States and were married in 1952. Cleo completed an internship in pathology at Christ Hospital in Jersey City, New Jersey, residencies in pathology at Mountainside Hospital in Montclair, New Jersey and Montefiore Hospital in the Bronx, and a fellowship in neuropathology, also at Montefiore Hospital. In 1958, Lambros and Cleo settled in Stamford, Connecticut, where Cleo joined Stamford Hospital as a pathologist and Lambros started his practice in general medicine and cardiology. Lambros predeceased Cleo in 2010. As a pathologist at Stamford Hospital, Cleo gained rapid standing where she served for 50 years. Despite her knowledge and dedication, Cleo displayed great humility, rarely seeking attention or adulation. Her focus was her colleagues and their patients, medical students, and the many important people who rounded out the staff in the laboratory. She championed the many endeavors of The Stamford Hospital Foundation through countless hours of work and dedication to its ideals. One of her greatest achievements was raising the funds for Stamford Hospital’s first mobile mammography unit to provide free tests to underserved local communities. In her honor, Stamford Hospital established a lecture series in pathology in her name and The Stamford Hospital Foundation granted her Director Emeritus status in 2017. In addition to the Stamford Hospital, Cleo was a Diplomate of the American Board of Pathology, and a member of the Stamford Medical Society, the Fairfield County Medical Society, the Connecticut State Medical Society, the American Medical Association, the Connecticut Society of Pathologists, and the American College of Pathology. Cleo was a great patron of the arts including opera, ballet, and classical music. She and Lambros were important members of The Greek Orthodox Church of the Archangels in Stamford where they dedicated many hours of service. They enjoyed traveling the world and maintained a close relationship with her sister’s family in Athens. Cleo’s and Aikaterini’s children spent their childhood summers together in Greece, and in America, she cherished time with her children and grandchildren at their summer home in Kennebunkport, Maine. She will be remembered as beautiful, vivacious, kind, and generous. Cleo is survived by her children Marianna Siderides, Elizabeth Siderides Theofanidis (Stylianos), and Elliot Siderides (Margaret); and her grandchildren Nicholas (Sarah), Lambros, and Alexandra Theofanidis, and John (Emily), Andrew, and Cleo Siderides. A private funeral was held on October 3, at The Greek Orthodox Church of the Archangels. A memorial celebration of her life will take place in 2021 when it is safe to do so. Memorial gifts can be made to 1) The Stamford Hospital Foundation, 2) The Greek Orthodox Church of the Archangels, or 3) Staying Put in New Canaan.

Share Your Memory of
Cleo
Upload Your Memory View All Memories
Be the first to upload a memory!
Share A Memory