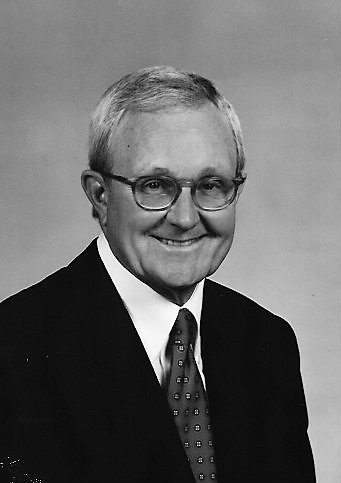 William F Souders, 92, of Darien, CT, passed away on September 24th, 2020 with his family by his side. William (Bill) was born in Detroit, MI on July 14, 1928, the first-born son of Julia (O’Brien) and Clifford Souders. Bill served with the parachute infantry in the United States Army during WWII, joining at the age of 17. He then attended and graduated from Lake Forest College where he met the love of his life Barbara Huskey. The two married and had three children, Susan, Scott and Sally. Bill and Barbara were married nearly 68 years until Barbara’s death in 2018. Bill spent most of his career at Xerox Corporation, serving as Executive Vice President of Operations before his retirement. He later came out of retirement to function as Chief Executive Officer for Emery Air Freight. Bill served on a variety of boards including St Joseph’s Hospital and Paradyne. Bill was an avid and accomplished golfer and was a long-time member of Wee Burn Country Club where he served as President from 1990-1993. Bill also served as President of the United States Seniors’ Golf Association from 1991-1993 and was the inaugural recipient of the William C. Campbell award in 2005. Bill is survived by his youngest daughter Sally Souders Firestein, son-in-law David Firestein of Pound Ridge and four grandchildren Dillon, Sophia, Guss and Hayes. He will be greatly missed but will have a place in their hearts forever. A private Memorial Service will be held at the Congregational Church of New Canaan for the family. Donations can be made in Bill’s name to The First Tee of Connecticut. For condolences online please visit www.hoytfuneralhome.com