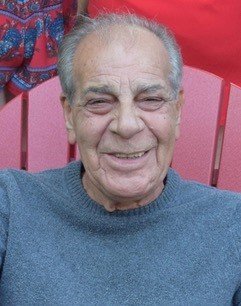 Guido (“Vito”) Badalamenti, age 79, a longtime resident of Brooklyn, NY passed away peacefully on May 26, 2020 in Norwalk, CT. Vito was born on August 28, 1940 in Carini, Italy. He was the son of the late Vito and Rosaria (Cataldo) Badalamenti and was the husband of the late Irene Badalamenti. Vito is survived by two daughters, Christina Colbert and her husband Joseph Colbert of Wilton, CT and Denise Murach of Brooklyn, NY. He was the devoted grandfather “Grandpa” of Alyssa, Christopher and Michael Colbert. Vito was the loving brother of Enzo Badalamenti of Flemington, NJ and Pino, Pietro Agata and Maria Badalamenti of Carini, Italy and the uncle “Zio” to several nieces, nephews, grandnieces and grandnephews. Vito was a baker for most of his life. He made his way from Italy at a young age, to the United States and became a citizen of the United States, a most happy and cherished day for him. He learned over the years how to bake the tastiest cookies, breads, breadsticks and an array of other bakery products. He’d work six to seven days a week for many years to support his family and because of his love of baking. A twisted loaf of bread baked in a brick oven was his specialty and was enjoyed by many. He retired at a late age because of his dedication to his craft. Upon retirement, he enjoyed meeting with his friends to play cards daily, however, he was happiest when he was surrounded by his grandchildren. Vito was always the first one to rise when his grandchildren asked to play baseball, soccer, basketball or to help plant in the garden. Vito never said no to his grandchildren’s request and was a willing participant in any activity. Vito will be deeply missed by all. A private service will be held in Connecticut. Interment will be in the family plot in St Charles Cemetery, Farmingdale, NY. In lieu of flowers, contributions may be made to the American Cancer Society www.cancer.org

Share Your Memory of
Vito
Upload Your Memory View All Memories
Be the first to upload a memory!