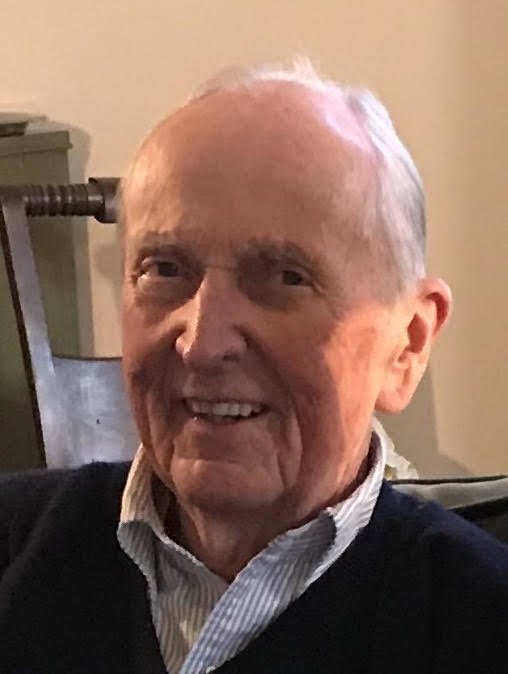 Thomas Richard Behan, 93, of New Canaan, CT, died peacefully on Friday, May 8th, 2020 at the Waveny Care Center. He was predeceased by his wife of nearly 62 years, Molly Ford Behan, who passed away on April 12, 2019. Tom was born on January 22, 1927 in Binghamton, NY, the son of Dr. William A. Behan, Sr. and Emma Leary Behan. He graduated from Binghamton Central High School in 1944 and entered service in the U.S. Army the following year. He later attended Georgetown University, where he earned an undergraduate degree in 1948, after which he enrolled in Georgetown’s Law School. He was awarded a law degree in 1952 and initially practiced law in Binghamton with the firms, Coughlin & Gerhart and Kramer Wales & Robinson. He married Molly Ford on May 11, 1957 and began a long and successful legal career at IBM, including assignments in Kingston, NY, Chicago, IL, and at IBM’s Corporate Headquarters in Armonk, NY. Throughout his time at IBM, Tom was regarded as a creative and able writer whose pen displayed the clarity and conciseness of an exacting legal mind. He was also well-known for his great sense of humor, displayed in personal interactions with colleagues, in satirical columns he wrote for the American Bar Association Journal, and as emcee of the highly popular comedic revue he staged for IBM Law Department annual meetings. He retired from IBM in 1989. Molly and Tom were a gregarious couple, maintaining a cadre of close friends in New Canaan and beyond. They shared a love for the game of golf and rarely traveled without their golf bags. Annual road trips to Amelia Island, Florida included stops at courses along the East Coast where their play typically included critiquing each other’s game in a playful and endearing way. They were a couple who truly enjoyed each other’s company. Tom and Molly were faithful members of St. Aloysius Church and active in the local community, supporting, among others, the New Canaan Library, Waveny Life Care Network, Catholic Charities, and the New Canaan Community Foundation. Survivors include several nieces and nephews. Tom was predeceased by his two sisters, Elizabeth Marcy and Helen Anderson, and by his brother, William A. Behan. Tom’s life will be celebrated with a Mass at a future date. Burial will be in Lakeview Cemetery in New Canaan. The family wishes to extend sincere thanks to the many wonderful caregivers at Waveny Care Center, true heroes who made the last several months such a joy for Tom.

Share Your Memory of
Thomas
Upload Your Memory View All Memories
Be the first to upload a memory!