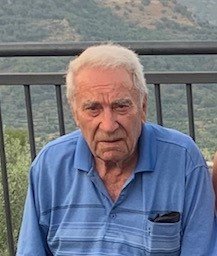 Salvatore Silvestro, a longtime Norwalk resident, died peacefully at the age of 88, Thursday, February 13, 2020 in Norwalk Hospital. Born in Castiglione, Sicily in March 1931, he was the son of the late Santo and Maria Silvestro. Sal was the loving husband to his wife of 68 years, Josephine Palumberi Silvestro. After immigrating to America in 1956 with pennies in his pocket and the vision of living the American dream, Sal set out to make his mark. Prior to opening his first fish market, he worked in various supermarkets as a butcher. Sal took pride in making his own wine, using his wood splitter to chop wood for heating his home and bargain shopping, even it if meant spending $10 on gas visiting 3 different supermarkets to save $2. Aside from grinding his own meat to make his own sausage, what he looked forward to most was his annual trip to Sicily, which he made for the past 50 years. In addition to his wife, Sal is survived by his two sons; Angelo Silvestro (Laura) of Duluth, GA and Santo Silvestro (Lynda) of New Canaan, CT; six grandchildren: Salvatore, Christopher, Anthony, Nicole, Leonardo and Stephanie and four great-grandchildren: Chase, Chris, Dominic and Rosalie. A Mass of Christian Burial will be held on Tuesday, February 18, 2020 at 10:00 AM in St Aloysius Church, Cherry Street, New Canaan, CT. Interment will be private. The family will receive friends at the Hoyt Funeral Home, 199 Main St., New Canaan, CT 06840 on Monday, February 17, 2020 from 4 to 8 PM.

Share Your Memory of
Salvatore
Upload Your Memory View All Memories
Be the first to upload a memory!