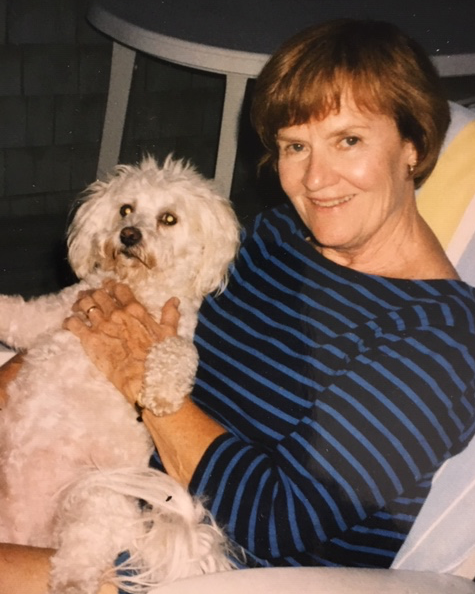 Frances “Fran” Gesualdi, 86, of New Canaan, CT passed away peacefully on the morning of Saturday, December 7, 2019 at Waveny Care Center in New Canaan.

Fran was born on January 5, 1933 in Norwalk, CT to the late William and Annie Gilleece Creagh. One of five girls, she was bright, mischievous, and active, spending her free time riding her bike, roller skating, playing dodge ball, and reading. She had a lifelong sweet tooth that she nurtured early on with 5 cent ice creams from Cody’s Drug Store. As a child, Fran was influenced by her grandmother Mary Creagh, whom she described as “strong and caring,” two qualities she strived for in herself.

She attended New Canaan High School, where she was a cheerleader, played on the girls’ basketball team, and sat on the Student Council. After graduating, Fran attended Merrill Business College in Stamford, CT, and landed a job at a local insurance agency. She was only 21 when she met and married the late Samuel J. Gesualdi in May 1954. The couple raised four children in New Canaan, and when her last child was in high school, Fran eagerly rejoined the work force using newly acquired technology skills.

Fran and Sam were married for 49 years, until his death in 2004. In 1994, they retired to Charlestown, RI, and Naples, FL, fulfilling a lifelong desire of hers to spend her days at the beach. Rhode Island also served as a home base for her children and eight grandchildren, who would come up for weeks at a time each summer. She was never happier than when she was surrounded by her family, and her grandchildren could always count on Gram’s French toast first thing in the morning.

She loved reading, doing crossword puzzles, playing tennis and card games, tending to her garden, going to the beach, and partaking in her evening ice cream. Those who knew Fran describe her as generous, loving, and lots of fun—she had an impish sense of humor and wasn’t above playing tricks on people. She treasured her wide circle of friends, many of whom she’d known since childhood.

Fran was a devout Catholic throughout her life and was an active parishioner at St. Aloysius in New Canaan, St. James in Charlestown, RI, and St. William in Naples, FL.

After being diagnosed with dementia in 2013, she reflected that she was most proud of the family she’d built. Her advice to them and others was to laugh as much as you can, don’t take yourself too seriously, be kind and polite, and treasure your loved ones.

A memorial service to celebrate Fran’s life will be held at St. Aloysius Church in New Canaan, CT on January 18, 2020 at 11 a.m. In lieu of flowers, contributions in Fran’s memory can be made to Constellation Hospice in Norwalk, CT or Waveny LifeCare Network in New Canaan.

Share Your Memory of
Frances
Upload Your Memory View All Memories
Be the first to upload a memory!