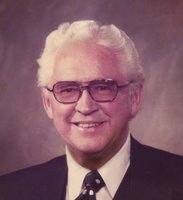 Ray Dolan was born in Chicago, IL on February 13, 1923. He is survived by his wife of 62 years, M. Theresa Voci Dolan of New Canaan, his three sons and their wives, Paul W. Dolan (Mary Anne) of Henderson, NV, Donald M. Dolan (Becky) of Phoenix, AZ, and Ronald M. Dolan (Linda) of Monticello, MN, his daughter, Sharon R. Dolan of New Canaan, 7 grandchildren Christy, Christopher, Randi, Nicholaus (Jessica), Ryan, Geoffrey, Sheridan, and 4 great grandchildren. He is preceded in death by his father, Christopher Dolan, Mother, Florence Taylor Dolan and sister, Colette Masterangelo. Mr. Dolan joined the National Guard on July 8, 1940, and Army Air Force on Sept. 11, 1942. Received ratings as a glider pilot, liaison pilot and navigator. Served as a navigator instructor, Oct. 1944 -1945. Assigned to B-29 crew and flew as a navigator on 30 combat missions. He is a decorated veteran having won the Distinguished Flying Cross and 14 other decorations. Met Theresa, an army nurse on Tinian, in August 1945, and became engaged while on Tinian. She was discharged in Feb. 1946, and they were married on May 25, 1946. After the war, was active in the National Guard and Reserves. Recalled for a year during the Berlin crises. Retired from Reserves in 1963 as a Lt Col. Executive Vice President Ray Dolan, CLU, also served as Equitable’s (now AXA/Equitable) Chief Distribution Officer. After returning from the war, he joined the Equitable in 1946 as an agent in the Warren Woody Agency and subsequently moved through a number of agency leadership position in Minneapolis, Minnesota and Sioux Falls, South Dakota. He was elected Divisional Agency Vice President in 1966 and elected Vice President and Chief Line Operations in 1971. He was elected to senior Vice President in 1974, leading Corporate Communications. In 1980, he was elected to Executive Vice President and in 1985 elected Chief Agency Officer. Mr. Dolan also served on several affiliated boards, including Donaldson, Lufkin & Jenrette and served as the Chairman of the board, Equitable of Delaware. Ray Dolan served as a Board Member of Mount Marty College (Yankton, SD) from 1964–1970 and as Vice Chairman of the Board of Trustees of Talladega College ( Talladega, AL) from 1977- 1985. Mr. Dolan is an alumnus of North Michigan University and received an honorary Doctorate from Mount Marty College. In 1969, Mr. Dolan earned his Chartered Life Underwriter designation. Mr. Dolan served as a member of the board of The National Council of Better Business Bureaus from 1978 – 1984 and as Chairman from 1980 to 1984 and was reelected to the National Council Board in 1985. Mr. Dolan was also active in the community as he served on the National Board of the Confraternity of Christian Doctrine and as Vice Chairman of the church lay board. Mr. Dolan joined the Knights of Columbus and was a Lifetime member of the 4th Degree Assembly. He was also very active in the Boy Scouts of America organization and served on the Fairfield County Executive Committee from 1969 – 1972. He also served as a scout leader for Troop 73. A mass of Christian burial will be celebrated on Saturday, November 8, 2008, at 10 am, at St. Aloysius Church in New Canaan. Internment with full military honors will follow the mass at Lakeview Cemetery, New Canaan. The family will receive friends on Friday, November 7, 2008 from 4-8 PM at the Hoyt Funeral Home, 199 Main St., New Canaan. www.hoytfuneralhome.com Donations can be made to the American Heart Association or the American Diabetic Association.