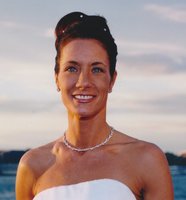 Carol Ann Sung, 56, of New Canaan, CT, passed away on January 26, 2020. She was born on October 31, 1963 to Louis and Carol Ciavarelli Lombardi. Carol was the beloved wife of Henry Sung of New Canaan. Carol grew up in Yonkers, NY and graduated from Lincoln High School in 1981. She received a four-year scholarship to play basketball at Mercy College in Dobbs Ferry, NY, where she studied psychology and received a Bachelor of Science degree. She worked as a guidance counselor for the New York Public School system for fifteen years, focusing on children with special needs. She continued her education while working and earned two Masters of Science in Education from Long Island University. In her late twenties, Carol took up parachuting and completed over 1000 jumps. After a twenty-year courtship, Carol and Henry married on October 7, 2000, in New York City. Just before becoming first time parents, Carol retired from the NYC School system, stopped jumping from planes, and devoted the remainder of her life to her husband and children. The family has resided in New Canaan since 2004. Carol is survived by her loving husband Henry, son Tyler, and daughters Camryn and Madison, all of New Canaan, her parents Louis and Carol Lombardi, her father-in-law, Tsia Fah Sung, her siblings Louis, Steven, and George (Chrissy) Lombardi and Linda (Cosmo) Romeo. Her brothers-in-law, Daniel and John (Jackie) Sung. Carol is also survived by many beloved nieces and nephews. Carol is predeceased by her sister Susan Friedhof. A Mass of Christian Burial will be held on Saturday February 1, 2020 at St. Aloysius Church, 21 Cherry St. New Canaan at 10AM. Interment will follow at Gate of Heaven Cemetery, Valhalla, NY. A visitation for Carol will be held on Friday, January 31, 2020 at the Hoyt Funeral Home, 199 Main St. in New Canaan from 2:00PM-5:00PM and 6:00PM-9:00PM. In lieu of flowers, please consider a donation to a charity of your choosing in Carol’s memory.