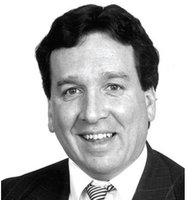 On Wednesday November 20, 2019, Al died suddenly at home in New Canaan at the age of 68. Great grandson of the New York Governor and 1928 Democratic presidential candidate, Al was himself a Happy Warrior, consummate New Yorker, longtime member of the New York Stock Exchange, and dedicated leader and fundraiser for charitable causes of the Catholic Archdiocese of New York and cancer research. Born May 24, 1951 in Brooklyn to Walter J. and Helen (née Conroy) Smith, he was raised in Rye, NY, attended Iona Prep and Villanova University, before assuming his father’s seat on the NYSE after Walter’s early death in 1972. Al was a specialist broker for most of his 36-year career on Wall Street, and was a longtime partner at Adler Coleman & Co., later CMJ Partners, and then at Bear Wagner, from which he retired in 2008. He was a longtime member of the Board of Directors of the Alfred E. Smith Foundation and served for 35 years as Master of Ceremonies at the annual Al Smith Dinner. As MC, he maintained the dinner’s long tradition of polite, good-natured and humorous interaction among civic and political leaders, most memorably every four years when the candidates for President of the United States were the honorees and objects of Al’s “I can’t believe he just said that” jokes. A three-decade survivor of cancer, Al was the founding force behind Hackers for Hope, an annual golf tournament that funded more than $15 million for cancer treatment and care. Al was the adoring (and adored) husband for more than 44 years of Nan (née Moore) Smith, the devoted father of Alfred E. (Amy) Smith, V, and Catherine (Matt) Totero, and the grandfather of six perfect grandchildren, Emilie, Spencer and Clara Smith, and Charlie, Grace and Ellie Totero. Survived by six brothers and sisters, eight brothers- and sisters-in-law, 26 nieces and nephews, and friends too numerous to count. Visitation Monday, November 25, from 4 to 8pm, Hoyt Funeral Home, New Canaan, CT and funeral Tuesday, November 26 at 11am at St. Patrick’s Cathedral, New York City. Memorial contributions may be made to Hackers for Hope or The Smith Foundation of the Catholic Archdiocese of New York.